After a series of exposés on Joey Gilbert’s fundraising for Democrats, Left wing politics, reprimand for taking thousands of dollars from a client before dropping them without doing any work, and cheating in a boxing scandal, he lost the Republican primary for Nevada governor in a landslide to Sheriff Joe Lombardo.

Despite the huge victory margin, Gilbert sued Sheriff Lombardo, forcing him to defend himself against a lawsuit not backed by “any competent evidence.” The court forced Gilbert to pay Lombardo $249,000 for the frivolous suit.

Unwilling to accept the decision of Nevada’s Republicans not to put a Democrat fundraiser in charge of the state GOP, Gilbert called on conservative Nevadan citizens to “wear [their] Joey shirts” and physically force their way into a closed venue at the local Trump Tower to disrupt a planned meeting between Lombardo and President Trump.

This afternoon the Gilbert campaign is planning to send protestors out to Trump Tower in Las Vegas to protest former President Trump, who will meet with Republican nominees Adam Laxalt and Joe Lombardo.

Some of the texts and Facebook messages that went out this morning encouraged people to breach the building and to try to get into Treasure Island to disrupt his speech and cause chaos inside the campaign event. [Emphasis added]. 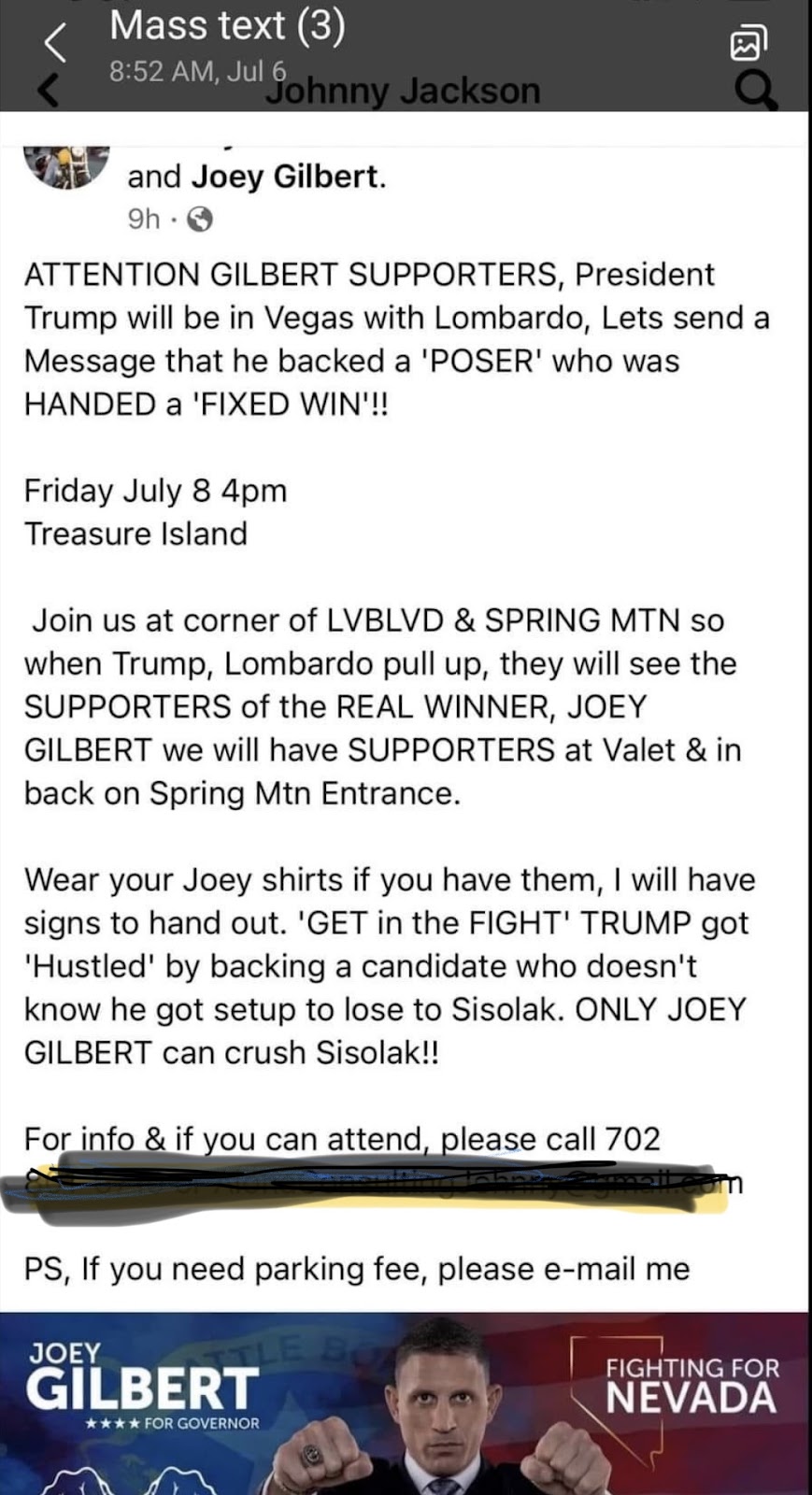 Network in Vegas warned conservatives that Gilbert’s protest was actually designed not to help Gilbert, who was already knocked out of the gubernatorial race, but the Democrat incumbent, Steve Sisolak, by creating doubts about Sheriff Lombardo and reducing voter turnout among Republicans.

Gilbert was in fact encouraging conservatives to join Democrats who were already planning to protest against the presence of President Trump in the state:

Democrat Plant Joey Gilbert has convinced these people he is still running.

In reality he is attempting to help Sisolak win!https://t.co/jV5vNuaZ64 pic.twitter.com/d1l7ThTZVn

Network in Vegas reported on an additional benefit to Gilbert in organizing a protest against President Trump. In addition to suppressing votes for the Republican nominee for governor, Gilbert benefited from the publicity as he began selling a book just after his loss.

In fact, Gilbert has zero interest in becoming Governor, but he does have a huge interest in staying in the public spotlight at all costs. The moment he lost the primary, he instantly launched a book, a book tour, and a public speaking tour to capitalize on his LOSS!

We told you Gilbert was never in it to win it!

A day after losing, Joey Gilbert is going on a book tour. This was always about making money, he never intended on being governor of Nevada. Disgusting that these grifters get away with this shit! Even sadder people fall for it! pic.twitter.com/qR2S2LnYsi

In the end, Gilbert succeeded in getting at least 10 supporters, referred to as “useful idiots” by Network in Vegas, to show up, some in Joey shirts as he requested.

Democrat Plant Joey Gilbert has convinced these people he is still running.

In reality he is attempting to help Sisolak win!https://t.co/jV5vNuaZ64 pic.twitter.com/d1l7ThTZVn

Ironically, one protestor held a sign accusing Democrat fundraiser Gilbert’s opponent of being the one who’s a RINO (Republican in name only).

Check back as we continue our series on Gilbert and look at these questions:

Fact Check: Are prosecutors preparing homicide charges against Fauci, others?